How To Fight DUI Charges in California 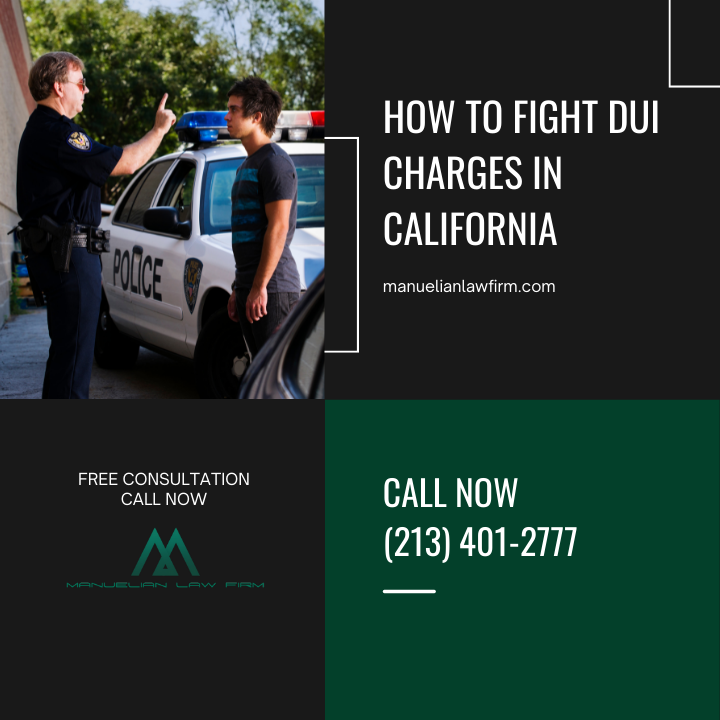 Have you been charged with a DUI in California? If so, you might be wondering what you can do about it and what steps you should take next.

California has specific laws related to DUI. In case you are caught violating any of these laws, you will be facing legal consequences of a felony or possibly a misdemeanor if it is your first time and if you have not caused any damage with your driving. This can mean prison time and fines. The DUI will also stay on your record and will likely negatively impact your chances of being hired for employment.

Although it may be possible for an individual to fight a DUI case on their own without legal representation, it is highly advised against due to the seriousness of the matter. Hiring an attorney to represent you for such a serious criminal offense is highly recommended in order to increase your chances of positive results.

Legal Defenses for Getting DUI Charges Dropped in California

In this article, we will go over a variety of legal defenses for getting DUI charges dropped in California. Although, we would like to make it very clear that we do not suggest individuals to risk attempting either of these options on their own without legal representation.

The least you can do is get a consultation from an attorney in order to have a better understanding of what the consequences may be if you attempt to defend yourself in court. Once again, legal representation by a criminal defense attorney is highly advised for such serious charges like a DUI.

We do not suggest you attempt either of these legal defenses on your own. Now that we have that cleared up, let’s begin discussing some of the legal defenses for dropping DUI charges that attorneys may use.

When you were first pulled over, the officer should have checked for signs of intoxication by implementing various methods aside from a breathalyzer test. They must also properly document this on their arrest report.

If an officer does not properly complete all the necessary steps that are legally required for them to do, they may be held liable for it. This can be used as a legal defense to help drop your DUI charges.

Title 17 of The California Code of Regulations states that results of a blood and breath test may not be used against anyone unless the results are first sent to a lab to be analyzed. The purpose of this is the ensure the accuracy of the blood alcohol concentration levels.

If the officer does not have documented proof of sending the results to a lab to be tested, this may be used as a legal defense to help drop your DUI case.

If you believe this may have been the case for your DUI, get in touch with our attorney right away for legal assistance with obtaining this evidence and presenting it to the court.

You Were Pulled Over Without Probably Cause

Sometimes it is possible for officers to mistake bad driving with driving under the influence.

If you were driving poorly but not breaking any laws while doing so, then the officer may have pulled you over without probably cause. If this is the case, it can be used as a legal defense for getting your DUI charge dropped.

The arresting officer is required by law to give you a field sobriety test. Additionally, he/she must also properly report the results on a DUI arrest sheet.

If they have not properly reported the results of the DUI arrest sheet, this may be grounds for getting your DUI charge dropped.

You Were Not Mentally Impaired During the Arrest

It is also possible that the officer may have documented assumptions about your condition during the arrest. For example, they may have written that you were acting normal when they first approached you. This may be used in your favor to help verify your mental awareness.

If you took a blood test right after using mouthwash, that could have been the reason for your high blood alcohol content due to the fact that it may get absorbed into your bloodstream. This may potentially be used as a legal defense especially if there is no evidence of you being mentally impaired during the arrest.

There are a variety of reasons why breathalyzer tests may give false results. For example, if you have acid reflux or heartburn, then your breath may show a high amount of acetone, causing a false reading during the breath test.

If you are facing a DUI charge in California, we suggest that you don’t try to fight it on your own based on the seriousness of the crime.

Our experienced DUI defense attorney at Manuelian Law Firm is here to help you get your charges dropped. Give us a call anytime at (213) 401-2777 or fill out the online form below and we will be contacting you shortly.