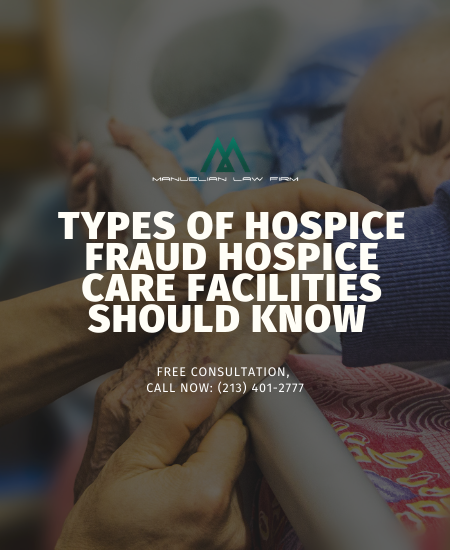 Some common examples of hospice fraud include: billing fraud, improper care/abuse, kickbacks, keeping patients on hospice care for long periods of time without medical justification, hospice enrollment fraud, and inflating the level of care beyond the care a patient actually needs.

It is unlawful to engage in hospice billing fraud. Generally, hospice bill fraud involves false claims to Medicare or Medi-Cal. The False Claims Act is a federal law that imposes liability on persons and companies who knowingly make a false record or file a false claim regarding any federal health care program. This includes any plan or program that provides health benefits, whether directly, through insurance or otherwise, which is funded directly, in whole or in part, by the U.S Government or any state healthcare system.

Violations under the federal False Claims Act can result in significant fines and penalties. Under the False Claims Act, 31 U.S.C. §§ 3729, anyone who violates the law “is liable to the United States Government for a civil penalty of not less than $5,000 and not more than $10,000, . . . plus 3 times the amount of damages.”

Hospice Kickbacks and the Anti-Kickback Statue

Under the Anti-Kickback Statute, it is unlawful to “knowingly or willfully solicit, receive, offer or pay anything of value to induce referrals or items or services payable by a federal healthcare program, including Medicare.”

If you or a loved one is facing hospice fraud charges, other healthcare-related fraud charges, or is under investigation for such, we invite you to contact our Los Angeles Healthcare Fraud defense attorney today for a free confidential consultation at (213) 401-2777. Our office also provides criminal defense consultations via Zoom, FaceTime, and Skype during the COVID-19 pandemic.