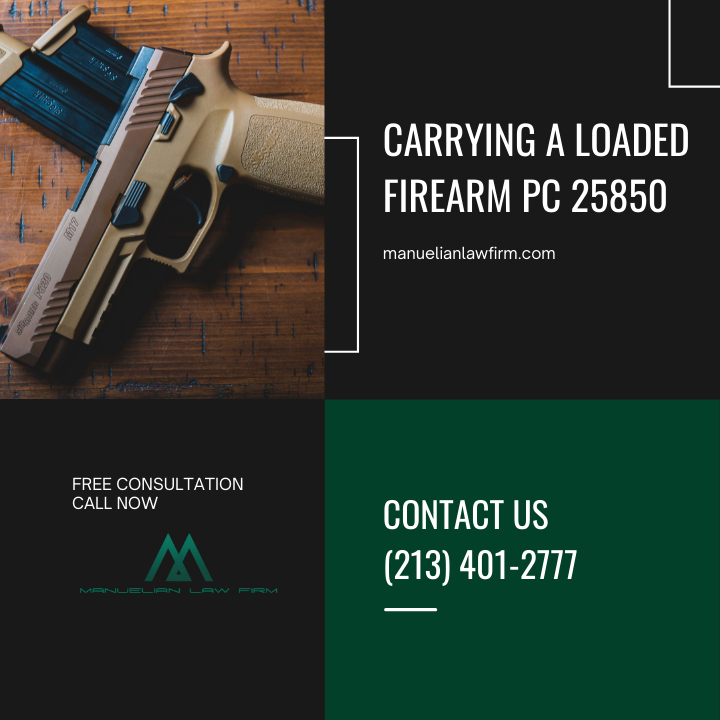 California PC 25850 makes it illegal to publicly carry a loaded gun in California. California has some of the strictest gun laws in the nation.

In order for someone to be charged and convicted with PC 25850, a prosecutor must prove the following:

Examples of Carrying a Loaded Gun in Public

Examples of carrying a loaded firearm in public include:

What Are The Punishments for a Carrying a Loaded Firearm Charge in California?

The punishments for a PC 25850 carrying a loaded firearm charge can either be a charged as a misdemeanor or felony depending on the circumstances.

Misdemeanor Punishment for a PC 25850 Conviction

For someone with no prior criminal background, the most basic punishment is a misdemeanor with a maximum of 1 year in jail and/or a $1,000 fine. This would apply in case there are no additional aggravating factors involved.

Felony Punishment for a PC 25850 Conviction

The felony punishment for publicly carrying a loaded firearm in California carries a minimum of 3 months in jail with up to 3 years in jail and/or a $10,000 fine. A person would be charged as a felony if either of the following applies::

There are several legal defenses for Penal Code 25850 charge, which include:

Are you in need of legal assistance for carrying a loaded firearm in public charge in California? Los Angeles criminal defense attorney RJ Manuelian has an excellent criminal trial record and national recognition. Our office offers a free consultation for clients facing criminal charges in Los Angeles County, Orange County, Ventura County, Palmdale, Lancaster, El Monte, and San Bernardino County. If you have a loved one have been charged with carrying a loaded firearm in public or any related weapons charges, we invite you to contact our office at (213) 401-2777 for a free criminal defense consultation.